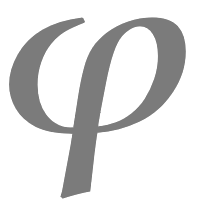 It was in the time that I still worked with my previous version of chimes, prior to the Koshis. One pleasant summer evening I had dinner on a terrace in the historic centre of Céret. Situated at the foothills of the French Pyrenees, it is a lovely old art town that has been home for many grand artists.

I came into a friendly conversation with someone at a table next to me. He took interest in my story of the chimes. Being an architect and thus quite at ease in the domain of proportions, ratios and relationships of spaces, he asked me if I had ever thought to try creating a chime in the proportions of the Golden Ratio.

Here I was at the point of being introduced to a different vision of creativity.

He went on, telling me of the irrational number φ (phi), being the result of a mathematical equation that defines the unique proportions of two lengths, thus expressing "a perfect harmony, the key to beauty".

It may have been used in architecture and art for over 4000 years as well as by the ancient Greeks. There are some that say that phi was applied in the calculations of some pyramids in Egypt. Leonardo Da Vinci is one of a few Italian renaissance artists that supposedly have used this mathematical concept. In more recent years some architects (Le Corbusier) and artists have consciously applied the ''Golden Ratio'.

"Look into it", he said, "you never know what influence it may have on the acoustics and tone quality". And that was enough to set me off on a search.

The main visual part of the chime is the cylinder. As I didn't find any information on applying the number phi to a cylinder form, I asked for help from a golden ratio lover whom I found on the web. He had never seen my chimes, so I just gave him the measurement of the cylinder radius, with the question of what should be its length in order to create this "perfect harmony". 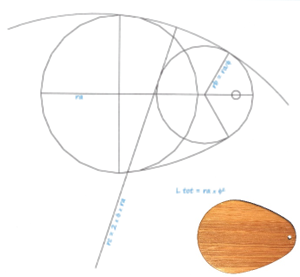 His answer still gives me chills. The number he gave me was within an exact millimetre of the length of the chimes that I had been making for years. A length that in origin I simply defined by intuition. My intuition had gained in trust.

I am not an easy believer and avoid superstitions. But how could I possibly ignore this great discovery when creating the Koshi chime.
Wanting more acoustic volume, I thus multiplied the length of the cylinder with φ and applied this same "golden ratio" to other proportions of the chime, as well as to the drop form of the wind catcher.
And so, the Koshi chime found its form.

"The heart has its reasons that reason does not know".